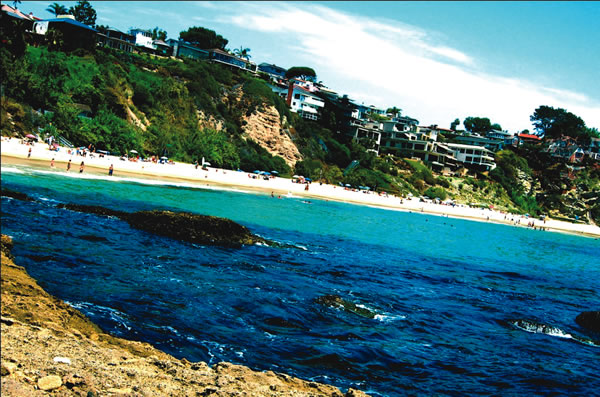 Introduction to the Enclave: The community of Three Arch Bay is lucky enough to enjoy one of the loveliest beaches in all of California with its two secluded coves in South Laguna Beach. The neighborhood is split into Upper TAB, above Coast Highway, with gorgeous views of the ocean on hillside properties and Lower TAB, on the ocean side of Coast Highway just a minute’s walk to the beach steps.

Bordered By: Coastal Mountain range to the east, the community of Dana Point to the south, Pacific Coast Highway to the west and the South Laguna Beach area to the north.

Views: Views from Three Arch Bay vary by home and street location. Most homes in Upper TAB have ocean views, growing bigger as you head up the hill in the neighborhood. Walk to the top of the hill and enjoy glorious views up and down the coast from Dana Point up to Newport Beach and beyond. In the evening, enjoy the sunset over Catalina Island from your deck at dinnertime. Lucky homeowners on the cliff in Three Arch enjoy the view of Three Arch Bay’s main cove, or Cliffside owners of property over smaller Shell Beach in TAB can check out the surf below and see what’s happening on Whale Rock below. Whale Rock is home to the Three Arches that give Three Arch Bay its name.

Homes: Originally TAB was a resort community of small cottages in the 1930s and has evolved into a very friendly community of about 450 homes over 120 acres of land. The wonderful thing about Three Arch is the variety of styles in the bay. Spanish, Modern, Ranch, Craftsman and original cottages line the streets of the neighborhood.

History of the Area: Three Arch Bay was a part of the Moulton Ranch in the late 1800s, and by the 1920s only five homes existed in the bay even though lots were for sale. Pacific Coast Highway opened in 1926 which created growth in the area. Three Arch became a resort community during the 1930s, with residents arriving for the summer and boarding up their homes for the winter. Lots were selling in the low $100’s! During the 1930s, movies were shot in the neighborhood including a duel on the rocks of Three Arch for the movie “Captain Blood” with Olivia de Haviland and Errol Flynn.

How the Community Has Evolved: It started as a vacation area for people coming to the beach from Pasadena and LA to spend their summers. Three Arch still has its part-timers, but that is definitely changing with many homes being used year-round. Children fill the streets playing, riding bikes, riding the surf, playing tennis or having fun in the neighborhood park. Our clubhouse and park is host to small and large parties, weddings and celebrations.

Community Features/Amenities/Special Events: 4th of July is a special weekend in the bay, as we host a community-funded fireworks show. A barge arrives in the bay in the late afternoon, and once it gets dark everyone enjoys the show from each or their homes after a day of picnicking and playing at the beach. Labor Day is another very special weekend in the bay with a volleyball tournament, children’s games which include running races, water games, surfing, boogey boarding and watermelon eating. We host an annual Pancake Breakfast at the park that weekend as well. A chili cook- off is held annually with great live music, and neighbors sharing and voting on their favorite chili while sharing a glass of wine. Park Night is held throughout the summer for the kids. Parents can enjoy a quick dinner out while leaving their little ones to play supervised games, with the traditional “Limo” dodge ball game as a favorite. Easter brings the traditional egg hunt to the park along with egg decorating. Christmas lauds the annual party with Santa for the youngsters. Three Arch has two private, lighted tennis courts and a basketball court. The biggest treasure is our fabulous beach with thriving sea life, community spirit, volleyball tournaments, bocce ball competitions and card games. Children and adults play in the surf, ride paddleboards, boogey board and skim away. The great and unusual thing about Three Arch Bay beach is that it has a natural feel because access is via two long staircases … so there aren’t any cars, golf carts or parking areas to disturb the pristine nature of the bay.

Why You Love Living Here: TAB has an amazing beach, gorgeous views of the ocean and a wonderful sense of community. Everyone knows everyone and we watch out for each other like the old days. Neighbors stop by to share some lemons, say hello or invite you for a barbecue. The other thing I love is being in the same neighborhood as my real estate partner: Liz Sganga who has lived in TAB about 20 years, I have been in Tab since 1994.

Information, provided by Ellen Bosworth, agent with Surterre Properties. Reach her at 949.464.3207 or by email at mailto://ebosworth@surterreproperties.com