Nick Hooper: Excelling in real estate through a comprehensive knowledge of business, construction, contracts and financing 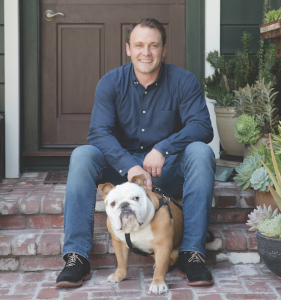 Born and raised in one of the less-than-posh neighborhoods in England, Nick grew up playing sports with an intense drive, borne of a father set on raising professional athletes and the innate competitive spirit that comes from being one of four brothers. Nick wanted something different for himself–an education and an adventure. After graduating from college, Nick moved to San Clemente and worked as a manager for a major soccer retailer.

Nick met his future wife, Claire, haggling over a discount for a pair of cleats for her son. Within two weeks, they were married.

After they married, the pair continued Claire’s passion of restoring and rejuvenating Laguna Beach cottages. As a natural progression, Nick became more and more involved in the real estate transactions, eventually obtaining his license to sell.

The fit was natural–Nick quickly partnered with Mike Johnson at the Mike Johnson Group, adding his deep understanding of the remodel cycle with an international flair. Nick found success quickly–his innate networking ability, combined with a drive honed by years as a competitive soccer player and a strong knowledge of the coastal market drove extraordinary results. With more than $100 million in sales since he started, Nick’s results stand out in any crowd of agents.

With Nick’s wife, Claire, owning a local home and decor store, Cock & Tail Home, and his kids in the local schools, Nick’s roots are deep within the local community. Whether selling or buying, a call to Nick will get the ball rolling. He will accomplish the rest.

Agent of the Week: Logan Montgomery

Agent of the Week: J.J. Ballesteros

Agent of the Week: Danielle Wilson