Raised in Laguna Beach, California, Scott understands the nuances and intangible benefits to homeownership in this quintessential paradise with its unmatched weather, landscape, and culture. Scott graduated from University of Sonoma with a Bachelor of Arts Degree in English and Pre- Law. But his passion remained in real estate having invested in and personally renovating a Victorian Style home at the age of 17. 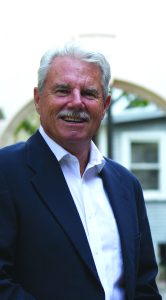 Having been a Construction and Project Manager in his early years, he has a wealth of knowledge in both commercial and residential real estate development and sales. His experience includes assembling large acreages and parcels into mixed-use multi-unit developments and high-end resort communities nationally.

Over the past several decades, Scott has become an esteemed realtor, highly regarded by his clients and professionals in the field. As a lifelong Laguna Beach resident, he is well-connected and actively involved in the community. This allows him to leverage his expertise in highly sought-aft er communities such as Emerald Bay, Three Arch Bay, and Irvine Cove.

As a dynamic supporter of community altruism, Scott is currently serving his fourth year as Chair of the Laguna Beach Heritage Society and is an active member of the Crystal Cove Conservancy, San Juan Mission, Golden Gate conservancy and the National Eagle Scout Association. He also takes pride in having mentored dozens of students over the years in their quest for a career in real estate.

Scott is known as the go-to “Real Estate Matchmaker” in the region with expertise in every aspect of real estate services, including strategic planning, land use, building regulations, repurposing, and the restructuring of residential and commercial dwellings.

Recently named the Number One REMAX Orange County Agent for production and sales in both the commercial and residential space, Scott continuously strives for excellence for both himself and his team.

Agent of the Week: Andrea Ballesteros

Agent of the Week: Carter Kaufman

Agent of the Week: Mike Johnson